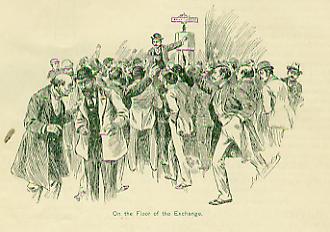 It is good for your image with the friends, kids, and others you are trying to impress to pepper your speech with Wall Street talk of the 19th century so that you gain gravitas as well as a rudder to understand present-day manipulations and squeezes.

As an example of how effective this method can be, one notes with approval the following example from Duncan Coker. Asked the other day for his opinion of a certain stock, Coker responded:

“Looks like the syndicates are bidding up pooled interests and public taking notices of tight control of capital stock and intentions of inside operators to advance. Some of these operators loaning to the shorts precipitating a squeeze for which the syndicate at that time unloads large blocks to the public.”

Mr. Coker, of course, is noted not only for his Conversational Activities; he is also quite the debonair man about town who is equally proficient at Factory Activities, see below (his family founded Sunoco Products) and Financial Activities (he serves as head patternmeister at Vic’s firm) and such Recreational Activities as fly-fishing and helicopter skiing. You can imagine the enormous esteem this combination realizes upon the fair sex.

You, too, can take a step in this direction, by studying this list of words from a dictionary the Collab and I are compiling, and using them to pepper your lingo at work and at home. Be sure to engage in this luxuriant activity before you trip the light fantastic or succumb to fair Morpheus each evening.

A Specialist in Panics,
from Fourteen Methods of Operating in the Stock Marketing (Magazine of Wall Street, 1909, reprinted by Fraser Publishing Co., 1968)

Agents; Foghorns
The propaganda which accompanies the moves in the leading stocks may be supplemented by sending agents to dozens of brokerage houses to talk loudly of moves in the less prominent stocks. This policy may be a negligible factor in a move, but a "foghorn
can walk into an office where there are 20 customers and several employees of the firm, buy 100 shares to back his statements and influence customers to buy. (Hickernell)

Agitation
It is only when misgovernment grows extreme enough to produce a revolutionary agitation among the shareholders that any change can be effected. (Spencer)

Army of Speculators
The army of speculators who form their battalions and charge up and down the field of the stock market is a motley crowd, and like the army of Xerxes, includes representatives from many nations -- Americans from all sections of the Republic, Englishmen, Scotchmen, Welshmen, Irishmen, Germans, Frenchmen, Spaniards, Italians, Russians, Norwegians, Danes, Hungarians, Hebrews, Greeks and Ethiopians, masquerading under the guise of bulls and bears, swell the host and rush together in hostile combat. (Fowler)

Ballooning
To work up a stock far beyond its intrinsic worth by favorable stories, fictitious sales, or other cognate means. (Munsey's Magazine)

Bear Brigade
The old gentleman took an omnibus up town, with a serene smile playing on his venerable features at the thought of his Pittsburg. J.F. passed down William Street with the air of a man who had inflicted, or was about to inflict, a terrible revenge on his old enemy Pittsburg, and joined a group of sad but determined looking men who belonged to the bear brigade and used to stand in front of the office of D. Groesbeck & Co. During the two weeks then next ensuing, it was amusing to watch the goings, comings and general looks of the bear brigade. Every pleasant morning they could be seen roosting on the iron railings in William Street, and sunning themselves, or standing around like lay figures the inside entrance to the regular board. First they were loud-mouthed in their predictions that the market was just on the eve of panic. Then, as the prices rose, they grew stiller, and finally subsided into a sulky silence. (Fowler)

Bear Operators
Several years ago, during a general market reaction, practically all active stocks were attacked by bear operators. Nash Motors held at 52. The money to buy Nash at 52 in unlimited amounts may have been provided by officers of the company engaged in Factory Activities. (Hickernell)

Behind the Market
A laggard pool hopes to sell out to investors who have the habit of selling something which has advanced sharply and then looking around to buy something which is "behind the market." (Hickernell)