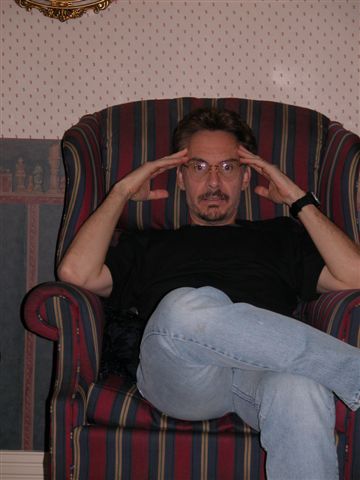 
Next week another employment report and another debate, interestingly juxtaposed with 8-year low volatility.

One could argue that the world was not as scary the last time vol was this low in early 1990s. In addition, why was VIX fear-gauge so high from 1996 through 2002 and so low recently? Chair and other's work suggests implied vol approximates realized vol fairly well, so historically the VIX estimate has given accurate forecasts. Will VIX remain an accurate forecaster? Some ideas on low VIX:

1.Successive removal of recent fear-inducing geopolitical bogeys (Olympic terror, DNC, RNC, 911 anniversary). The decline in VIX post-Iraq I and II are similar, which is consistent with removal of uncertainty as wars were won. (Evidently traders don't worry about Kerry's winning the peace).

2.Hedge fund popularity in post-stock bubble era, with nearly $1 trillion now under management, dissipating alpha, and increasing leverage. With this year's paltry returns it seems likely many funds are under-performing and may try for a bang up last-quarter. Presuming that higher returns require taking more risk, managers might seek same via risky strategy of selling options - putting downward pressure on implied volatility. Of course managers are watching VIX, and the low premiums to sellers might be interpreted as little pay for little risk.

The latter scenario raises concerns of an accident waiting to happen. However, it's been pointed out that unlike the pre-LTCM world, today there are thousands of hedge-funds taking both sides of risk trades with their trillion. This multi-hedged world could dissipate risk, reducing the chances of market shocks and perhaps help explain why VIX seems low in the face of threat of terrorism, losing the peace, and rising oil. What's not as clear is what happens to volatility if many funds close due to high-water problems and are forced to liquidate.

Since the above contained nothing new, for those interested, this site has schedule of upcoming economic reports and events which may effect markets.