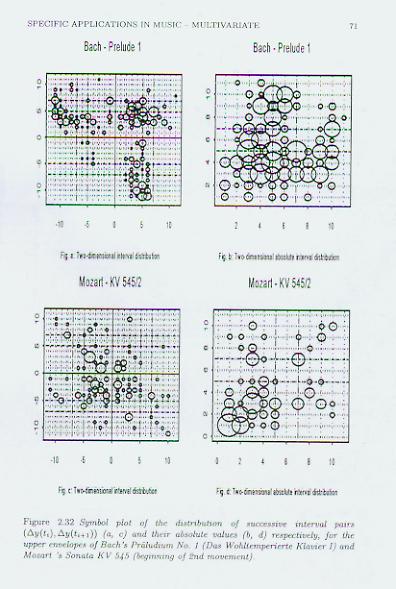 The area of statistical musicology is a gold mine for improving one's understanding of art and markets.

Musical pieces may be considered a time series consisting of an open and moves by favored intervals above and below  the open occurring at various speeds and durations, with other time series from other instruments (or markets) creating the harmony.

I was particularly intrigued by a study that attempted to quantify jumps in consecutive notes in melodies according to the 11 intervals in the chromatic scale. A four-interval jump corresponds to a major third, and a five-interval jump is a perfect fourth, etc.

The bivariate distribution of consecutive jumps, i.e., a scatter diagram of how often a jump of a given magnitude is followed by another, is a very fruitful area in understanding music. Jumps can be considered on an algebraic or absolute basis.

I particularly enjoyed looking at scatter diagrams of Bach pieces, because they corresponds to much to consecutive changes in the stock market with jumps of 4 and 5 intervals being most common. These are almost invariably being followed by jumps of 1, 2 or 4, in descending order of frequency. The jumps down of 4 or more are invariably followed by a much greater frequency of up jumps. And this is because the composers are much more likely  after a decline to write notes that are higher than notes  that are lower.

The music of Mozart is much more evenly divided in the four quadrants, and Scriabin is wild like the derivatives expert says that the market is.

I found some new ways of analyzing markets by considering these jump distributions and I will illustrate with some work and charts and examples  that the I did not have the chance to present during my lecture, accompanied by Laurel at the piano, at the Feb. 23 student investment conference at the London Business School (the reason for our silence last week). 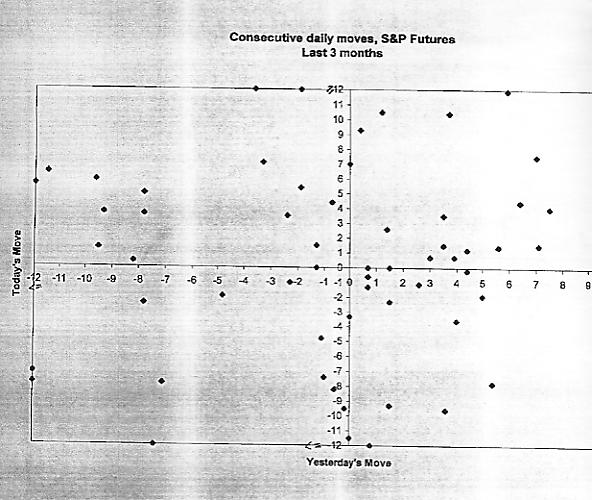 A good link to the literature>>>

For more of Victor Niederhoffer's writings>>>