An interesting book, Wall Street and the Country, states: "Many organs of public opinion, even among those which have been credited with sound economic views, have been swept along upon a current of popular agitation favor of the extension of the power of the state in a manner radical in itself and far beyond any previous exercise of it sanctioned by American political ideals. The denunciation of the stock exchange, one of the most necessary functions of modern industry, and the abuse of large corporate insiders have become undiscriminating and extreme. These expressions have tendency to stimulate a degree of popular prejudice which militates against a dispassionate solution. There seems under present conditions to be too wide a chasm between men of action and men of thought."

The book is not reviewed on Amazon, perhaps because it was written in 1904, but the same situation is as true today as then. 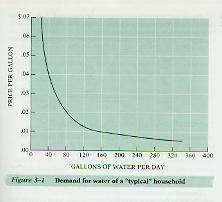 Three things give stockholders protection. The main thing is competition. Everything has substitutes. An invaluable discussion of this is in Chapter 3 of "The Economic Way of Thinking," by Heyne, Boettke and Prychitko where they have a vivid discussion of the alternate uses of water showing its increasing inelasticity at very low levels of quantity demanded, but extraordinary elasticity as we change the way we mow our lawns, sweep the driveways, flush toilets, take showers and use washing machines as the price of water changes.

Companies, when they get fat and don't reduce costs to a minimum, tend to be eaten up by their rivals. Incentives come into play when they get deregulated or bought out by sharp operatives who have an eye to reducing costs. One-fifth of the Fortune 500 companies get taken over every 10 years. These external controls -- and the unrelenting competition from substitutes making demand curves for all our unregulated products highly elastic -- are our main protection. Knowledge of opportunities for increased competition provide the opportunity for profit. A beautiful case study of this is Cummins Engine, given in Chapter 11 of Pashigian, Price Theory and Applications. He shows the relentless fight that management put up to attempt to take the company over in the '80s using every legal and political trick in the book to ward off the Icahns of the world who wanted to use the resources more efficiently and make more profits for the stockholders. But in the 2000s it was to no avail; they had to perform, and their stock took off. The situation is repeated throughout the ensemble of public companies, past, present or potential, as they move from private to public or regulated or government owned to deregulated and the incentive system works its magic.

You might ask what the Hades does this have to do with practical investing, as many of our critics often do? Systematizing these forces, by ascertaining companies where incentives to perform or perish are coming into play a la Cummins Engine and CME, and many recently deregulated companies a la UPS, and ascertaining of commodities where substitutes are going to come into play, does lead to the main chance.