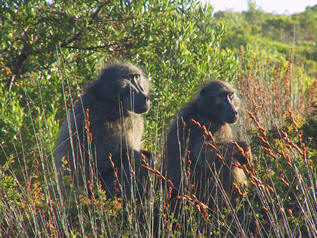 Hunting the Elusive Altruism in the Stock Market, by Victor Niederhoffer

On a recent visit to the South African savannah, I was confronted with an example of reciprocal altruism when my daughter Katie yelled to me just as a dominant baboon prepared to attack me from behind in order to seize the ice cream cone I carried.

She thereby increased the danger to herself, but knew that out of gratitude I would warn her or share resources with her to put her out of danger.

The value of altruism was first suggested by Darwin to explain the social behavior of ants and bees, and was then quantified by Bill Hamilton. His famous formula is that altruism will occur when:

where R is the proportion of genes the donor share with the recipient;

B is the increased expectation for number of children that the recipient will produce; and

C is the reduced expectation for number of children that the donor will have.

This leads to such predictions as that a individual should sacrifice himself to save two siblings, two children, four grandchildren or eight cousins. It explains such things as why prairie dogs will stand up to warn their sisters even when a badger is more likely to attach them because of their increased visibility, why ground squirrels give alarm calls when a predator is sighted, why vampire bats will feed their children, and why bee-eating birds will stay in the nest to help with feeding instead of breeding on their own.

The question immediately emerges as to whether certain markets provide altruistic warning signals about great danger to other markets. To study this I looked at the last 16 daily warning signals of silver where silver went down 10 cents or more in a day and looked at the performance of the S&P the next day as follows.

Conclusion: There seems to be no inordinate degree of altruism in silver toward the stock market, and indeed an unpublished study shows that silver is relatively spiteful toward oil.

[Vic wrote:The question immediately emerges as to whether certain markets provide altruistic warning signals about great danger to other markets.] Fascinating question. Might it benefit the gene pool if the weakest of the species sacrificed themselves for the propagation of the strongest? Or if the capture of the slow and the lame alerts the swift and able, who attempt their escape?

The banking stocks persistently trade at the bid, while the oil stocks move size at the offer -- resources shift from one niche to another in the face of rising rates. Just as the NASDAQ makes new lows, the large S&P traders lift their offers...a few seconds pass...and buyers enter the fray.

Market technicians and fundamentalists remain faithful to their telescopes, altruistically benefiting those who study the teeming life and Darwinian struggles beneath the microscope.

The question is how a gene favoring reciprocal altruism would develop. Even if it benefits a group that has it, the question is why it would survive and spread long enough to get to that point.

The genetic benefit to kin is there even if it is not reciprocal, which explains paternal love. We find siblings compete for parental attention but tend to unite against outside dangers, which makes perfect sense when one looks at the relative genetic benefits in each case. But before verbal communication developed older siblings would know who their younger siblings were but the opposite would not be true. By engaging in altruism for toward those who engaged in such acts for you, younger siblings would be benefiting the genes they shared with their older siblings.

With regard to altruism, there would be a benefit to appearing to be altruistic to encourage altruistic behavior of others toward oneself while actually cheating. This in turn would lead to the evolution toward strong emotional reactions toward those caught cheating. After reading about this in "The Moral Animal: Why We Are the Way We Are: The New Science of Evolutionary Psychology" by Robert Wright, I have also seen some more recent articles on experiments that have demonstrated the latter behavior patterns.