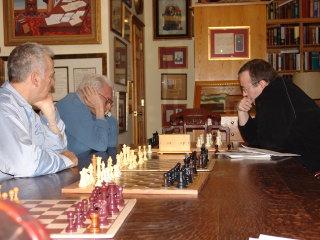 The grandmaster has recently suffered a loss or two. And much advice has been given him, "Just wait for a turn to get involved." Here is his answer.

So you see the problem I'm having with this as a trading method is that it seems difficult to make it work even with the benefit of hindsight, unless we assume that your 'feel' got you in and out at the various tops and bottoms. And where does the middle 80% come into it? Does that mean you buy after a 20% up move after the target 10% has been lost (i.e., on a 1% rally after a 10% drop from the highs) and then hold for another 8%

As you see I'm having a problem with the lack of specificity about these tops and bottoms. It's rather like reading John Murphy's coffee table manuals. And rather than go to all this trouble for a miserable 10% per annum (which may not be repeatable in the future), isn't it better just to buy an index tracker and focus your efforts on feeding it?

I start by looking at the graph. The 10% is not a magic number. It just so happens that for the past year or so, 10% has been a frequent opportunity. So, back to a 10 year plot of SPY. I note that if you had held the stock during the bubble you were presumably "feeling" good as the thing was rising and you were wallowing in profits. Then, suddenly, it's dropped severely and you note that the previous minimum is at around $125 in the second half of 1999. The scary thing then is, that the next minimum is below $100 in 1998. So these are the candidate bottoms, since we aren't fortune tellers. Only "feel" could have told you when to sell after Sept 1 2000. Suppose you sold within 3 or four days. You then knew that 125 was the next minimum. And I'm sure I would have bought near 125. Now, the fall from 135 would doubtless have caught me and I would have sold at or near 125. No profit. Why? Because the "feel" says we are going down and the crash back from the brief up has been too fast. So I would sit and wait (as I am doing now). I would know though, that the next bottom is less than 100! And so I would be out of the market until either early 2001 or Sept 11 (if I really waited for <100. Now, if I had bought on changed feelings in early 2001, Sept 11 would obviously have caught me and I would then hold until I could get out with some profit at the end of 2001 or beginning of 2002. Please don't misunderstand me: I cannot predict the future and can only sense whether we are near some kind of local minimum or maximum and what HISTORY says to us. Yes, I trust history because I know that regime changes are unpredictable and I'm going to get stuffed by them anyway! But then, because I'm in an index, I must sit and wait. It has taken me some time to learn that patience is what matters. It is very, very difficult to be patient, but I have seen how easy it is to lose money by jumping in and out of the market when it seems just to move against you. The fact that, long term, the market rises, is what saves you when you stay with indexes. Right now, every day I plot all the XL indexes against the S&P to see which is lagging and which is furthest of 12 maxima. When I go back in, it will be to that one (or those) which seem to have the most potential upside (in terms of the past 12 months) and which are lagging most behind the S&P since history all these sub-sectors wax and wane. Right now, XLV is roughly 25% behind on a two year basis, XLP is around 14% off, XLK is level but has fallen off the most recently, XLF is level, and XLY, XLI, XLU, XLB and XLE are in front. So, when I go back in, in the absence of a sudden crash in one of the sectors, I would be looking at XLV, XLP and XLK. If I wanted to be in the market right now (for whatever reason), XLP would be safest given its nature, but also provides the least evident upside. So, I'm left with a choice between XLK, which is fallen nicely right now and has a very neat looking minimum at 18, but with the prospect of 14 if things really mess up, and XLV which has a local minimum at around 28.85, but then more at 27.60 and 26.60 and a guaranteed upside of 32. XLK offers an upside of 22. My sense is that when I get the feeling that the market has bottomed, I will go into both of these in equal measure. But my hope is for a sudden decline in XLP, because that is always money for nothing even if the margin is inevitably less! Only time will tell.

Well OK, let's assume your 'feel' will hold up in future. But from 1918-2003 the UK stock market returned an average of 11% per annum, which means you might do better with passive systematic investment and save yourself the trouble.

Yes, indeed, if you have that long! The US market did the same, but did nothing between 1960 and 1980, so it does indeed depend on your time horizon. I'm trying for something between day trading and buy and hold. Only time will tell whether it works. One factor that is, however critical is the state of the economy as it relates to the stock market. I believe that three states may be distinguished: 1. Favorable, 2. Unfavorable, 3. Unclear. I'm not a good enough economist to refine these ideas further, but in the spirit of Keynes (whose General Theory you must read to find out more about "feel" and what he calls "animal spirits". The fact that he was an anti-semite and a socialist doesn't matter. He made loads on the market!) I would say that 1 and 2 hold when there is a GENERAL CONSENSUS that they apply! If we think it, it is so! Because if we think it, we act accordingly. ("We" means the press, the experts, etc). If you now you are in the middle of a bull market, just buy and hold. If you know you are in the middle of a bear market, stay out. And you know when "we" know. Right now, I believe it is safe to say that we are in state 3. There is no consensus about what is happening "going forward", to use the new American phrase. So I look for ups and down to make some money until "we" decide on 1 or 2. Who knows? This market may tank for the next year or two. But then the atmosphere will tell us that. Hopefully!

Nigel Davies is a trader and an International Chess Grandmaster residing in the United Kingdom. Visit his Web site at www.tigerchess.com.