(address is not clickable)\

Street Life in London, With Permanent Photographic Illustrations Taken From Life Expressly for this Publication, published by the Fleet Street firm of Sampson Low, Marston, Searle, & Rivington in 1878, is a collection of interviews with tradesmen who did business en plein air. With chapters on chimney sweeps, ad-board men, ginger-beer makers, discount retailers of fish and foreign strawberries, repairers of cane chairs, and makers of effigies for burning in the street, the book is a marvelous panorama of a mainly free market in which people adapt and find niches for survival by satisfying ever-changing consumer tastes at every strata of society. While the trades and photographs are quaint, the vignettes on cons, competition, overregulation and foreign trade seem curiously modern.

From the Street to the World 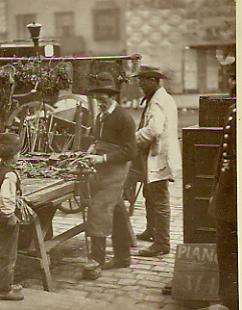 Some street trades were merely the most visible links of great international chains of business. Clothing, for example, passed from trader to trader as it aged. Clobberers patched, cleaned and resold used clothing. When such resuscitations were no longer effective, other tradesmen recut the cloth. Skirts might become waistcoats, children’s jackets or caps, to be sold cheaply all over Europe. When these at last turned to rags, British hops growers bought them for manure; or, they went to cloth factories to be torn into shreds by steam-powered toothed wheels, mixed with wood, woven into cloth, dyed in fashionable colors and made into ‘new’ clothing;

Scrap iron, too, was likely to find its way abroad. Street locksmiths (photo at left)  not only fixed locks, but sold old iron articles such as frying-pans, gridirons, saucepans, candlesticks, broken pieces of chain, old boilers, tea-trays, fire-irons, bolts, wire, hoop iron, axes and saws as ballast in ships bound for the United States, where it was remade into gun-barrels and pilings.

Technology for the Masses

Some dealers specialized in costume jewelry “remarkable alike for its variety, its artistic beauty, its marvelous imitations of real gems and ornaments, and its fashionable designs… astounding examples of the cheap products of skilled labor.” The public demand for earrings, scarf pins, rings, brooches, bracelets and combs for hairdos, and low initial outlays, lured more and more traders to the business, driving down returns. Yet the clever still managed to thrive.

“Wot I does is this,” one trader confided. “It’s my little game always to have a novelty on my barrow.” Charging a penny apiece for sleeve-links, brooches, studs and lockets that wholesaled at sevenpence a dozen, this trader further improved his results by selling these articles for for sixpence each to innocents in the countryside. He also negotiated a rate of sixpence a dozen with his long-term suppliers, and undercut his competitors to drive them out of business.

“It’s a poor business now, but by workin’ twice as hard as before, it’s about the same when the week’s done,” he tells the interviewer, a charmingly humble remark perhaps directed at potential rivals.

Then as now, some industries were dominated by certain foreign groups. Italians sold halfpenny ices and trained their children as street fiddlers, organ-grinders and harpists.

The chapter on “Street Doctors” quotes a member of the fraternity: “Our profession is known, sir, as ‘crocussing,’ and our dodges and decoctions as ‘fakes’ or rackets…. I have been a cough tablet ‘crocus’ for nine years, only in summer I go for the ‘Sarsaparilla ‘fake.’ The ‘Blood Purifier’ is made up of a cheap herb called sassafras, burnt sugar, and water flavored with a little pine-apple or pear juice. If it don’t lengthen the life of the buyer it lengthens the life of the seller.”

A whole hierarchy of umbrella vendors existed. Some traders went door to door offering china in exchange for broken umbrellas, old coats and hats to be sold on Petticoat Lane, where wholesalers paid sixpence a week for admission to the market. There, the umbrellas were bought by mush fakers, who mended them skillfully and sold them on the street. Vendors with more capital sold green umbrellas near the Royal Exchange (“on a very showery day these men have realized as much as 2 pounds in a few hours”). These green umbrellas were likely to collapse at the first wind, but were useful in a pinch; quite similar to the products sold nowadays by African immigrants on the streets of Manhattan. Vendor with still larger capital stationed themselves on stools at street corners and sold shoddily repaired second-hand merchandise as new.

Uneasy Relations With the Law

Heavy-handed regulation stifled some street trades. The final chapter in the book, “The Independent Shoe Black,” is a melancholy tale of the misguided regulation’s effect on enterprise. Concerned that able-bodied men were degrading themselves by shining shoes, the authorities decreed that the entire trade should be handled by Boot-Black Brigades open only to boys. The boys were given exclusive rights to a corner, and paid a salary paid for partly by subscription. The trouble was that hardly any boys wanted to join the brigades. The authors, citing the Annual Report of the Ragged School Union, wrote that only 12 boys had been recruited in 1876 to join the nine boot-black brigades, despite London’s rapidly increasing population and a depressed economy. 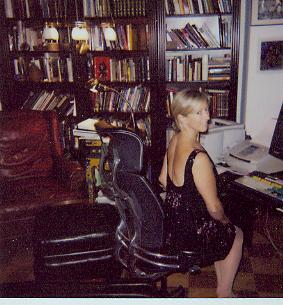